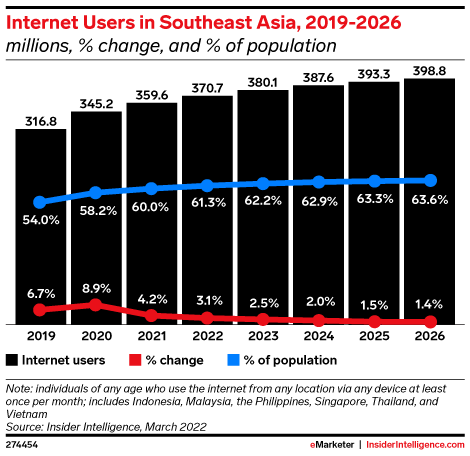 The number of internet users in Southeast Asia will grow 3.1% year over year in 2022, making it the second fastest growing region in the world. Since 2019, when 54.0% of the region’s population went online, the number of internet users will increase by 53.9 million. Still, we expect, this year, 38.7% of Southeast Asia’s population will not use the internet at least once per month.

Internet adoption varies widely across countries in Southeast Asia. Internet penetration among the population ranges from around 75% in the more mature economies to about 60% in the less developed ones. The underpenetrated countries offer significant upsides for digital commerce.

Southeast Asia’s internet user size will be tough to ignore at 370.7 million in 2022. But it will still be dwarfed by the giants next door—India and China. The six countries in the Southeast Asia subregion will account for 14.4% of internet users in all of Asia-Pacific in 2022, compared with 39.9% in China and 25.4% in India.

Led by Indonesia and Vietnam, the number of smartphone users in Southeast Asia will reach 326.3 million in 2022, accounting for 88.0% of internet users. The smartphone is driving internet access in the region, giving rise to the on-demand economy and opening up a plethora of opportunities for service providers, retailers, and digital platforms. 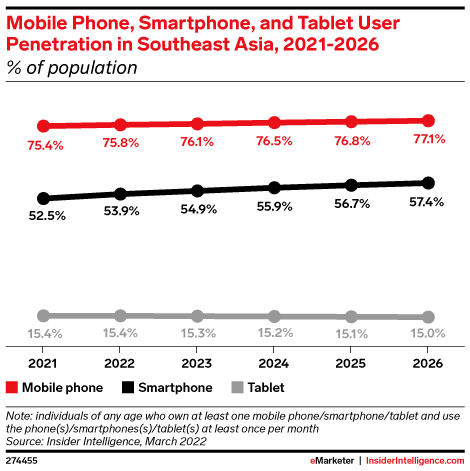 Once a hot commodity, tablet user growth has hit a wall. Tablet users in Southeast Asia will grow by less than 1% annually through our forecast period. This is a vast change from years prior to 2017, when tablet user numbers registered double-digit growth annually. This slowdown is the result of the growing popularity smartphones with larger screens and low adoption rates of household broadband.