Mondelez has launched the second leg of ‘Not Just a Cadbury ad’ that went on to win two lions this year at Cannes.

This Diwali, Cadbury and Ogilvy India take their campaign ‘Not Just a Cadbury ad’ a notch higher.

They have used machine learning to recreate Shah Rukh Khan’s face and voice to promote all possible local stores in India.

Mondelez India and Ogilvy India’s Not Just a Cadbury ad from 2020 was one of the most talked-about campaigns during Diwali last year. It took the internet by storm, garnered a lot of love from brand experts and went on to win two Cannes Lions later in 2021. Now, the brand and Ogilvy India have launched the second edition of the ad and it has only gotten grander. This time, Cadbury India is giving an opportunity to local businesses to hire India’s biggest brand ambassador, Shahrukh Khan.

According to IBEF.org, India has about 6.3 crore MSMEs and the number of retail grocery retailers across India in 2020 amounted to about 12.8 million. This included traditional and modern retailers within the segment, and excluded SMBs and a gazillion different kinds of local stores. It is impossible to cover all these stores in a campaign. So, how did Cadbury India make it possible for all of these small enterprises to onboard Shahrukh Khan as their brand ambassador?

The brand turned to Artificial Intelligence. It used Machine Learning to recreate Shahrukh Khan’s voice and face to take the local store’s names in the ad. It was followed by a hyperlocal targeting campaign. The different versions of the same ad with local store names were targeted as per the pincode of the viewer, showing them only the nearby stores.

From garment owners to local sweet shops, all SMBs can visit Cadbury India’s website and create their own version and share it on their social media platforms.

The ad ends with happy faces and local store owners expressing how amused they are. “I still can’t believe that Shah Rukh Khan made an ad for my store,” says a local garment owner.

“The small stores around us deserve to have a Happy Diwali,” says Shahrukh Khan, who has indeed become India’s biggest brand ambassador as he represents SMBs of all kinds this year.

Not much to our surprise, the ad has gone viral and no one could stop talking about it over the weekend. 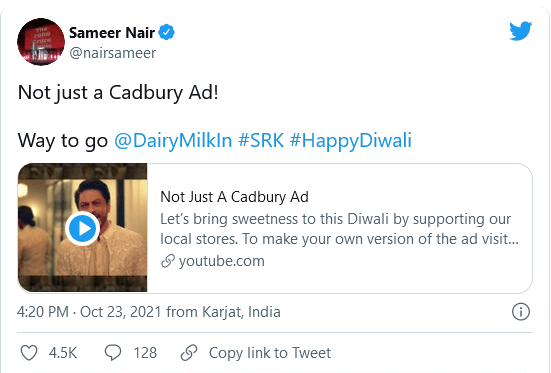 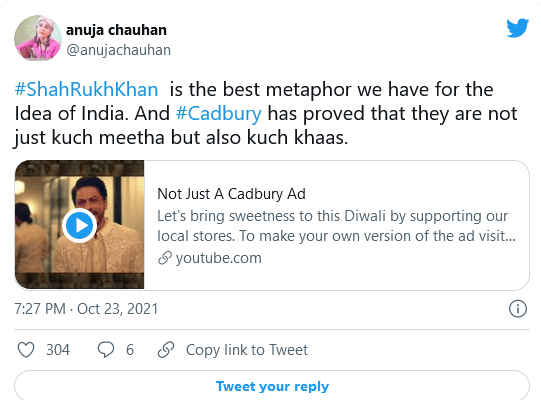 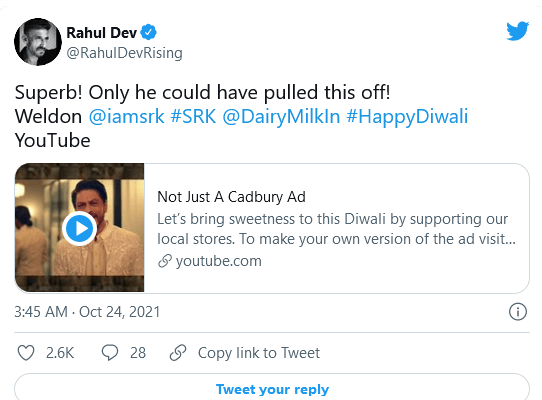 Commenting on the launch of the second edition of the campaign, Anil Viswanathan, Senior Director – Marketing, Mondelez India, said, “2020 was whirlwind of a year, followed by an unhurried 2021. The lockdowns proved to be an ambush, especially for small businesses. The launch of the ‘Iss Diwali Aap #KiseKhushKarenge’ campaign was our way of lending support to those local ventures, helping them build resilience. It is the success of our first edition that inspired us to further take our purpose of generosity at the heart of these businesses and make their 2021 Diwali even more joyful, and we are thrilled to onboard the nation’s most beloved and talented actor, Shah Rukh Khan as the face of the current campaign. We have also partnered with Rephrase.ai who helped us leverage the might of AI, and help local business owners to light up their brands with a special personalized ad. Not only bringing their audiences closer but igniting interest amongst newer ones. Over the years, our products have become an intrinsic part of India’s celebrations. With this effort, we hope for our consumers to not just take home our products, but also live our purpose of small acts of generosity as they welcome the festive fervor with friends and family.”

Sukesh Nayak, Chief Creative Officer, Ogilvy India, said, “The happiness that we generated in 2020 with our first edition of Not just Cadbury ad inspired us to come back with another edition of the idea. We used the power of AI Tech to help numerous small store owners create their very own personalized ads. We hope that this initiative helps boost the sales of small store owners and makes their Diwali sweeter.”

Shekhar Banerjee, Chief Client Officer, and West Head, Wavemaker India, said, “The massive success of this effort in 2020 prompted us to take it to the next level in 2021, considering Diwali celebrations still haven’t returned to pre-covid levels. Consumer and local store outlook is still subdued, and we felt it was relevant this year to continue to extend our support to local retailers. True to our philosophy of leveraging data and tech in crafting all consumer experiences, we have pushed ourselves to greater heights and more inclusivity. We’ve expanded the scope from 250 pin codes in 2020 to 500 pin codes this year, reaching 2000+ local retailers. This year we’re also adding a way for local stores as well as consumers to create their personalized ads and promote themselves or to support their local retailers.