Indian microblogging app Koo is witnessing a record surge in its popularity as tensions escalate between larger rival Twitter and the Indian government on allegations that certain accounts on the American platform were stoking unrest over the controversial farm laws. This is as per a report in the Economic Times.

In the last seven days alone, the year-old app has seen a ten-fold increase in downloads leading to a cumulative three million lifetime downloads within the country alone, it said. Founded by serial entrepreneur Aprameya Radhakrishna — who sold his earlier venture TaxiforSure to larger rival Ola — along with Mayank Bidawatka, Koo has been making waves for its focus on snagging local language users onto its platform.

Facebook backer Accel’s Indian arm, Kalaari Capital, Blume Ventures and former Infosys board member TV Mohandas Pai’s 3one4 Capital are among the blue-chip investors of the app, which was ironically trending on its rival platform Twitter, on Wednesday.

India’s telecom sector, in the efforts of enabling policies including more quantum of the spectrum, is set to establish new benchmarks in the next-generation network deployments and service delivery.

Since Monday, several notables including union ministers including Piyush Goyal and the government’s premier think-tank Niti Aayog have flocked to Koo in protest against Twitter’s noncompliance with India’s requests to ban certain accounts on the platform. The Bengaluru-based app gained further prominence on Wednesday when the Ministry of Electronics and IT (MEITY) posted updates on Koo before publishing it on Twitter, as was the norm earlier.

At the heart of the ongoing spat between the centre and Twitter, is the refusal by the American company to suspend a total of over 1,400 accounts related to farmers’ protests. While it has withheld some of the accounts identified in the blocking orders, it has not taken any action on the accounts of news media entities, journalists, activists, and politicians. 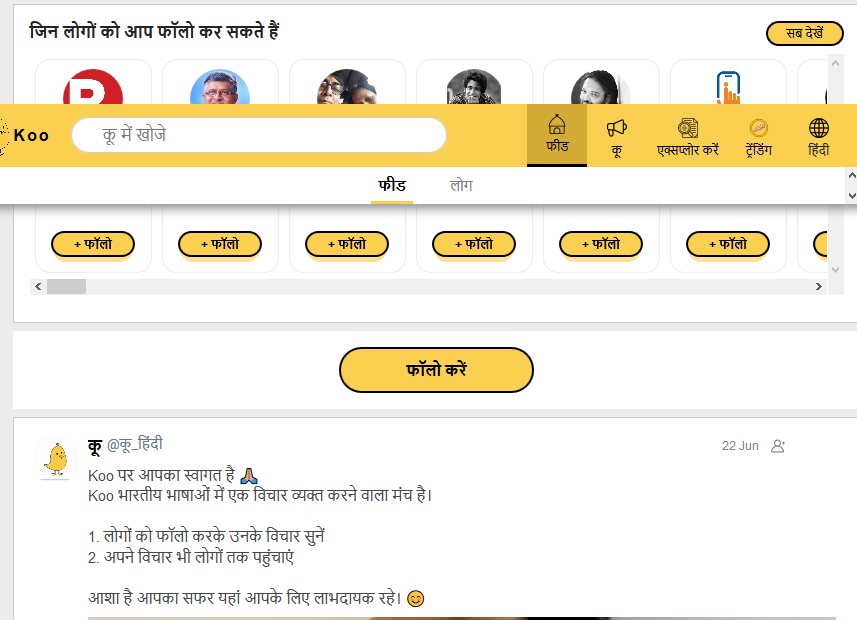 “(Government accounts is) absolutely a game-changer for Koo, (which) can help them reach their constituents much more deeply in their own regional languages. And this will also help Koo get more fans on the platform. High profile accounts are automatically migrating to Koo given the uptick in usage and visibility of the platform,” sai Anand Daniel, partner at Accel India.

“Overall, we (Koo) are an open platform where people can express themselves under Article 19 of the constitution. Freedom of speech is a right but there are certain lawsof thelandthatsupersedethis particular article and the constitution talks about it,” Bidawatka told ET. “A company that is based in India will obviously respect the views of the government because it is representative of the people.”