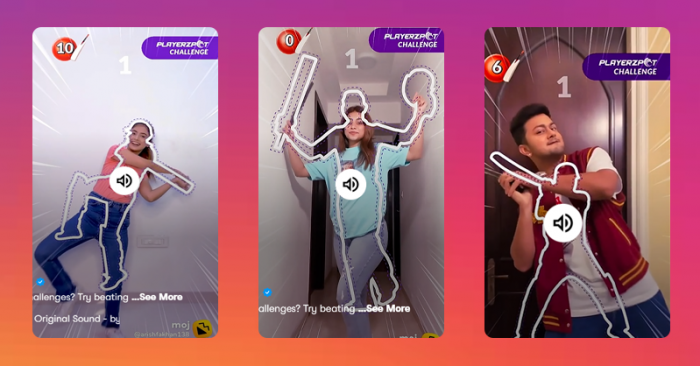 With an aim to establish its presence during the IPL and drive engagement, PlayerzPot launched the #PlayerzPotChallenge on Moj to garner millennial and Genz attention towards the fantasy gaming platform.

With an aim to engage the audience in a fun cricket-related activity that can generate massive awareness for the PlayerzPot, the fantasy gaming brand launched a hashtag challenge on Moj during the Indian Premier League. The case study takes a detailed look at its execution and results.

Short-form videos are one of the most popular genres of entertainment on the internet. The industry has witnessed exponential growth in the past few years. According to a report titled, ‘Online Videos in India— The Long and Short of It, released by Bain & Company— by 2025, India will be home to 650 million users who consume short-form videos.

Launched in July 2020, Moj is today one of the top short video apps in India with the highest monthly active user community of 160 million. The platform claims to have evolved as the ultimate destination for entertainment, providing an immersive social experience to its community.

With the largest music catalog, a great camera experience, and best in class content recommendation engine, Moj is the platform for talented creators to display their creativity to the world.

The fantasy gaming brand PlayerzPot launched the #PlayerzPotChallenge on Moj to spread awareness and create engagement amongst millennials and GenZ about its platform. The aim of the campaign was to establish PlayerzPot as the new playground for all the cricket fans through a fun Hashtag Challenge that complimented the sport and established the brand name effectively.

Moj designed a lens to engage the user community in a fun hashtag challenge that encouraged users to replicate cricket shot poses. The user-generated content campaign was immensely successful in establishing brand recall and salience amongst the target audience.

During the IPL season when cricket fever was at its all-time high. PlayerzPot wanted to establish its presence and create a massive awareness & engagement campaign reaching out to the millennials and GenZ highlighting their fantasy gaming offering. The brand used Moj to effectively drive its message to its target group.

Leverage Moj to raise awareness about the new fantasy gaming platform PlayerzPot amongst GenZ and millennials.

The Moj community is spending 34 minutes on an average day on the platform. The young community loves participating in popular trends and is attuned to the latest moments shaping popular culture through short videos.

Moj wanted to engage its community in a fun cricket-related activity that could generate massive awareness for PlayerzPot, its tagline ‘Khela Kya?’ and the brand music.

Moj designed a lens-based hashtag challenge where users got a chance to show off their posing skills by copying the cricket shot poses shown on screen and experience being a part of the game. The users had the liberty to unleash their creativity and pick up anything at their disposal like belans, jhaadus, stump, stick that resembles a bat to copy the given pose. The campaign was spearheaded by top Moj influencers.

A lens-based hashtag challenge #PlayerzPotChallenge was launched on Moj. A campaign banner was created on Moj for users to identify and participate in the campaign. The banner directed users to the hashtag challenge page that gave out detailed instructions about the campaign. The challenge was also made part of the explore section of the platform. To participate, the Moj creator community had to replicate 5 cricket shot poses shown on screen and score maximum runs out of each pose.

Each pose based on its difficulty would fetch the creator points in the form of runs (for eg. 2 runs for the first pose, 4 runs for the 2nd & 3rd pose & 6 runs for the 4th & 5th pose ) and it will call out a ‘0’ if it’s not posed correctly. The aim was to score maximum runs by the end of 5 poses to be eligible for gratification at the end of the campaign.

Some of the top digital influencers such as Awez Darbar, Nagma Mirajkar, Jannat Zubair, Nita Shilimkar, and Rohit Zinjurke were a part of this campaign.

Other top influencers such as Arishfa Khan, Pankaj Joshi, Mohak Narang, Surbhi Rathod, and Vishnu Priya along with many others also participated in this campaign.

The campaign was also amplified on Moj’s Instagram handle and it garnered 45000 + engagements.

The campaign has been a massive success in terms of numbers as it got over 1 billion views with 50+ influencers participating in the contest. Not only this, but the campaign also witnessed massive usage of the lens where 300k+ user-generated content was created.

Commenting on the campaign Ajit Varghese, Chief Commercial Officer, Moj said, “We are committed to our vision of empowering creators and brands with campaigns that can help in the growth of their businesses. This collaboration with PlayerzPot fulfilled the purpose of our vision by delivering 1bn+ video views, triggered by 50+ influencers to fuel up 300K+ user-generated content which was bang-on for the brand to entice the desired association and connection with cricket during IPL.”