How affected was WhatsApp by Pegasus (An Commercial Israeli Spyware) In India, Asks SC; It Also Questions WhatsApp’s Privacy Policy & In Turn Facebook’s

The Supreme Court on Monday asked the Centre and WhatsApp, the latest entrant into app-based payment services, to respond to petitions questioning the Facebook-owned service’s privacy policy with a focus on how secure the platforms were from Pegasus spyware. This is as per a report in the Economic Times.

One set of petitions challenged WhatsApp’s new privacy policy even when pleas questioning its earlier privacy policy are still pending adjudication. A second set of petitions, including one by Rajya Sabha MP Binoy Viswam, has questioned the steps taken by payment apps run by multinationals like Google, Amazon and Facebook and raised the issue of Pegasus spyware targeting WhatsApp users. 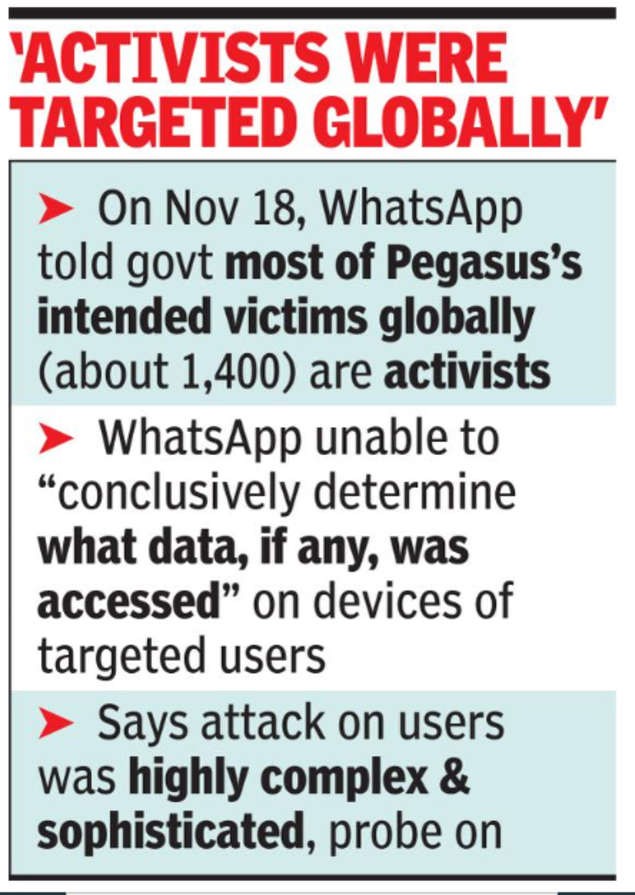 Appearing for WhatsApp, senior advocates Kapil Sibal and Arvind Datar told a bench of Chief Justice S A Bobde and Justices A S Bopanna and V Ramasubramanian that WhatsApp Pay has received all clearances from authorities and that these petitions should not cause any impediment.

But CJI Bobde said, “Has Pegasus resulted in any mishap? Will one of you file an affidavit saying there was no ill-effect of Pegasus?” When Sibal said it was for the government to tell the court whether Pegasus affected Indian users of WhatsApp, the bench asked all parties to file their affidavits in the pending petitions within four weeks. It also issued notices to the Centre, the RBI and the National Payments Corporation of India (NPCI) on Viswam’s petition, which was argued by senior advocate Krishnan Venugopal.

Media reports had suggested that WhatsApp was allegedly used by Israeli cyber-security firm NSO Group to carry out surveillance on journalists and human rights activists using a spyware called Pegasus and WhatsApp had sued NSO Group in an American court complaining that the surveillance was allegedly carried out between April and May 2019 in 20 countries, including India.

In his petition, Viswam had said, “RBI and NPCI have permitted three of the big four tech giants — Amazon, Google and Facebook/WhatsApp — to participate in the UPI ecosystem without much scrutiny and in spite of blatant violations of UPI guidelines and RBI regulations.

“The said conduct of RBI and NPCI puts the sensitive financial data of Indian users at huge risk, especially when these entities have been continuously accused of abusing dominance, and compromising data, among other things. Recently, for the said allegations, CEOs of these foreign entities were directed to testify in a hearing with the judiciary committee of the US Congress.”