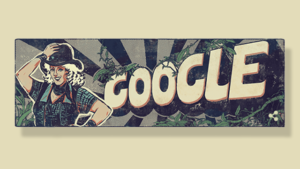 Popularly known by her stage name, ‘Fearless Nadia’, Mary Wadia is revered for her role as the masked and cloaked adventurer, Hunterwali, in the feature film released in 1935 by the same name.

The Google illustration that pays tribute to this unconventional superstar is created by Bangalore-based comic illustrator Devaki Neogi and draws inspiration from Nadia’s look in her old Hindi movie posters.

A young and talented Nadia was introduced to Hindi film industry by J.B.H. Wadia, the founder of Wadia Movitone, a production company and studio based in Mumbai that was particularly known for its stunt and fantasy films. It is said that initially no one was ready to distribute ‘Hunterwali,’ that starred a blonde, blue-eyed Nadia. This is when the Wadias took up and the film went on to become a massive success at the box office.

During the 1930s to 1940s this Australian-born performer became an integral part of the Hindi film industry. She appeared in 38 films and earned herself the tag as a talented actor who performed her own stunts. Her portrayals often included that of an Indian woman fighting injustice and saving the masses from oppressive rulers, a theme that ran well towards the end of the British Raj in India.

As reported by the Hind, Dorothee Wenner, author of ‘Fearless Nadia – The True Story of Bollywood’s Original Stunt Queen’ referred to Nadia as a “radical feminist actress”.  He also mentions that before becoming a Bollywood success, Nadia worked as a circus performer, which allowed her to perform trapeze activities and her own stunts on screen. Ms. Wenner also goes on to say that “Nadia’s success reached countries like the UAE, France, Greece and Italy, etc. In that way, she happens to be India’s first crossover actress.”

In ‘Khiladi’ a James Bond inspired flick that came out in 1961, Nadia lifted a man and threw him in the air – at that time she was in her 50s. Speaking on a Television interview in the 1980s, Nadia describes how, director Homi Wadia, (whom she later married) during a screen test asked her if she would be able to lift a man. After she successfully executed the feat, he made it a habit of making her do it in every movie, said Nadia.

In 1993, three years before Nadia passed away, her nephew and filmmaker Riyad Vinci Wadia made a documentary titled ‘Fearless: The Hunterwali Story’. The film received much critical acclaim.  Vishal Bhardwaj ‘Rangoon’, released in 2017, is also said to be loosely based on Nadia.