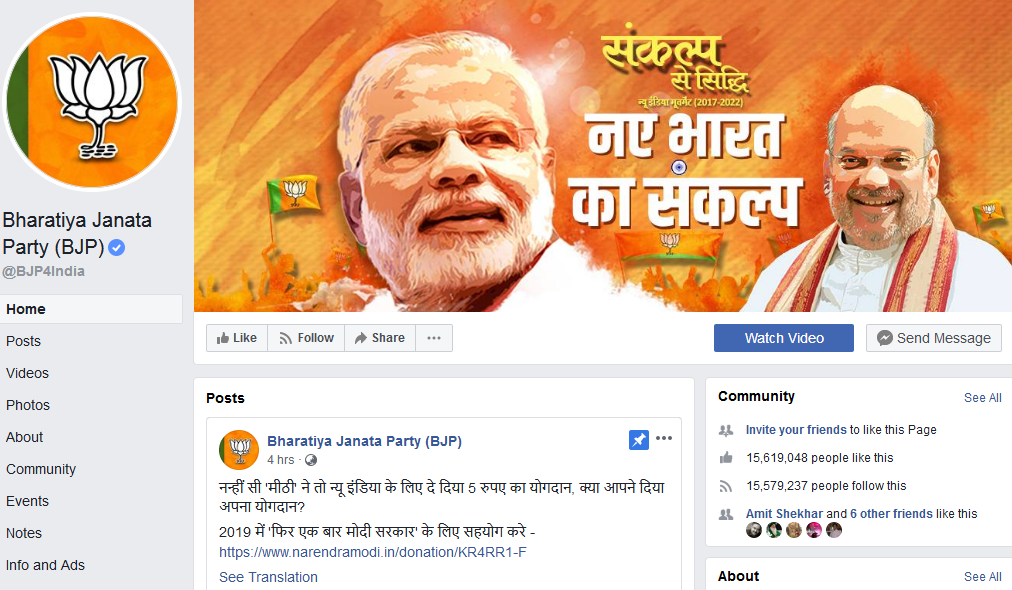 When India votes in general elections next year, it will be the world’s largest democratic exercise, and the biggest ever test of the role of social media in an election. This is as per a report published by Reuters.

As the ruling Bharatiya Janata Party (BJP) readies for battle with the newly energised Congress party-led opposition in the election that must be held by May, the role of Facebook, Twitter and WhatsApp could be crucial in deciding who wins.

India already has close to 900 million eligible voters, and an estimated half-a-billion have access to the Internet. The country has 300 million Facebook users and 200 million on Facebook’s WhatsApp messaging service – more than any other democracy. There are about 34.4 millions Twitter users in India, as per a Statista report.

“Social media and data analytics will be the main actors in the upcoming India elections. Their use would be unprecedented as both parties now use social media,” said Usha M. Rodrigues, a communications professor at Deakin University in Melbourne, Australia, whose research has focused on social media and Indian politics.

The potential for abuse is also immense, with incendiary news and videos capable of fanning violence in the sprawling multi-religious and multi-ethnic nation.

Political differences have in the past been no less deadly.

“Social media discourse, already bitter, will turn bilious,” Milan Vaishnav, a senior research fellow at the Carnegie Endowment for International Peace in Washington, said of the coming campaign for the general election.

“It will be no-holds barred on social media given that the opposition smells blood and the ruling party has its back against the wall.”

Both the main parties accuse each other of propagating fake news while denying they do so themselves.

Nevertheless, the battlelines between them are clearly drawn. Congress has attacked Prime Minister Narendra Modi’s economic policies and his party’s Hindu nationalist ideology, while the BJP dismisses the Congress as incompetent liberals out of touch with the people.

This month, Congress won elections in three major states that have been the bastion of the BJP, setting the stage for a tight contest in 2019. Helping the opposition party was a revamped social media strategy.

At the last election in 2014, Congress was crushed by the techno-savvy Modi and his array of social media weapons, including a flurry of Tweets from his personal account, a BJP campaign on Facebook and holographic displays of Modi in remote villages.

Congress leader Rahul Gandhi got a Twitter account only in 2015. But the opposition party is catching up and the playing field has gotten a lot bigger.

India now has 450 million smartphone owners against 155 million at the last election in 2014, according to Counterpoint Research. That’s more than the entire population of the United States, the crucible for election campaigns on social media.

Reuters visited one of the hubs of Congress’s online operations in Rajasthan, one of the three states it won this month – a drab three-bedroom apartment up a dimly lit staircase in the city of Jaipur.

Inside, party workers tracked news channels and social media posts on a wall of television screens. A three-member team of audio, video and graphic experts designed campaign material that was posted to public websites, while other volunteers used WhatsApp to send instructions to party workers.

“We were kids back then, but we are going to outmanoeuvre them now,” said Manish Sood, 45, who runs his own social media marketing business and was managing the Congress volunteers at the Jaipur war room.

A request by Reuters to visit the BJP’s social media centre in Jaipur was declined, but a member of the party’s Rajasthan state IT unit, Mayank Jain, said it ran similar social media operations from two city apartments.

“Congress understands social media a bit now, but they do not have the volunteer manpower,” Jain said in an interview, showing dozens of BJP WhatsApp groups on his phone, one of which was named “BJP RAJASTHAN’S Warriors”.

While Twitter and Facebook were embraced by Indian politicians – mainly in the BJP – in 2014, it’s WhatsApp that has now become the social media tool of choice.

In Jaipur city and the nearby rural town of Tonk, where traditional methods like public speeches and poster campaigns were widely used during the state poll, Congress and BJP party workers showed a Reuters reporter dozens of WhatsApp groups they were part of and used for campaigning.

But WhatsApp has been at the centre of controversy. After the false child kidnap messages were spread on the platform in India, it was flooded with falsehoods and conspiracy theories ahead of the October election in Brazil.

WhatsApp’s end-to-end encryption allows groups of hundreds of users to exchange texts, photos and video beyond the purview of authorities, independent fact checkers or even the platform itself.

“WhatsApp is the biggest challenge for us right now on the social media front,” said Nitin Deep Blaggan, a senior police officer in charge of monitoring online content in Jaipur.

WhatsApp has limited the number of messages a user can forward in one go to 20 but in India specifically the ceiling was fixed at five. The company blocked “hundreds of thousands” of accounts in Brazil during the election period, and the same was expected ahead of India polls, a source aware of the company’s thinking said this month.

“We have engaged with political organizers to inform them that we will take action against accounts that are sending automated unwanted messages,” Carl Woog, WhatsApp’s head of communications, told Reuters in a statement. He did not name any parties.

A Facebook spokeswoman said the company was “committed to maintaining elections integrity” and making efforts to “weed out false news”. Twitter said it had made efforts to protect the electoral process and better detect and stop malicious activity.

During the Rajasthan election, police ran a 10-man social media monitoring unit, tracking tweets and Facebook posts related to the state polls. Inside the monitoring room, the posts were shown on wall-mounted screens and automatically filtered into neutral, positive or negative sections.

The negative posts received special attention – they were manually checked and, sometimes flagged to senior police officers for further investigation and action.

The sole aim, members of the monitoring team said, was to ensure that no online post spilled into violence.

One of the posts flagged by police when Reuters visited was a video from a Congress leader’s rally where people appeared to be shouting slogans in favour of Pakistan, India’s old enemy.

Congress’ nearby war room had already debunked the video they said was doctored. Within hours, party workers posted what they said was an “original” video,  that showed that nobody shouted such slogans at the rally.

A news report which was published around the 24th of December, said that the BJP to form a chain of WhatsApp groups to strengthen communication between party workers before the 2019 general elections.

In the first conclave of BJP’s booth in-charges in Delhi, senior party leaders including party president Amit Shah gave ‘mantra’ of victory for 2019 and slammed Congress and ruling AAP in Delhi.

‘Panna Pramukh’ are booth level BJP workers who are responsible for keeping in touch with voters named in one page (panna) of an electoral roll in a constituency.

Lal also advised booth workers to meet at least 10 families every week who do not support BJP and persuade them to vote for the party in 2019 polls.

“If you meet 10 such families, till the next Lok Sabha elections party will reach up to around 25 lakh such new families in Delhi,” he said.

He also advised them to prepare list of “influential” people residing in the area of their booths and also hold hold gatherings to listen to Prime Minister Narendra Modi’s radio programme ‘Mann Ki Baat’.

The booth incharges were also told to study causes of BJP’s defeat in previous years and ensure contact will all the voters in their booth.