Since September 2020, Colgate-Palmolive has been using the power of a smile to encourage a positive outlook on life, despite the trying circumstances of the pandemic. It launched the push in Thailand with its Yimsu campaign by Ogilvy and dedicated shop Red Fuse, and followed it up in Malaysia with another series on smiling in challenging circumstances.

Now the dental-care brand has extended the campaign to The Philippines.  In a country battered by the pandemic, the sense of “pangiti-ngiti lang” (just smiling through it) has been prevalent, and the brand and agencies wanted to seek out personalities who typified this outlook. By sheer chance, Marlon Fuentes, a Grab driver who has Tourette’s syndrome was discovered by a team member who took a ride in his car. He became the face of the campaign. 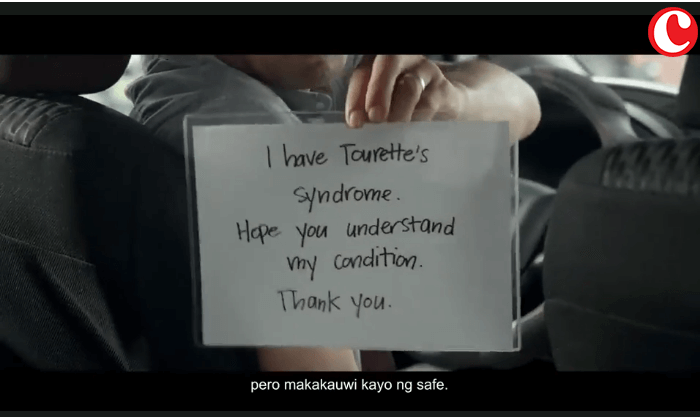 The film above shows the struggle Fuentes faces. The film above shows the struggle Fuentes faces, typified by a woman who leaps out of his car mid-ride, spooked by his physiological symptoms. Fuentes persists with his work—aided by a handy card explaining his condition—-and  he wins over many passengers.  Highlighting people who battle and surmount difficult circumstances (aided by a dazzling smile to lift the mood) is a great way for the brand to wedge itself into consumers’ minds. It is strange that the film has been made as if Covid doesn’t exist at all. Throughout it, neither the passengers nor Fuentes, who is likely most in danger, are wearing masks. Perhaps circumstances were different when the film was shot. But with the Omicron

Omicron
variant resulting in more than 33,000 daily cases in  Philippines, the lack of masks, or a shield separating the driver and passengers, is seriously jarring. And anyway, Colgate really needs to show smiles in a campaign that’s literally about smiles. But at the same time, not showing the pandemic’s impact at all might make you look out of touch with the sentiments of embattled consumers.