CEOs Lead From The Front In Fight Against Fake News

Apart from fake messages and posts and critical feedback on social media, heads of companies are also taking ownership of employee experiences gone wrong. This is as per a report in the Economic Times.

Recently, a video alleging that Domino’s Pizza uses ‘fake’ cheese went viral (made by BBC and released on 19th April 2018), and one of the first people to respond was Pratik Pota, chief executive at the pizza chain’s India franchise partner Jubilant FoodWorks, tweeting that the video was fake. 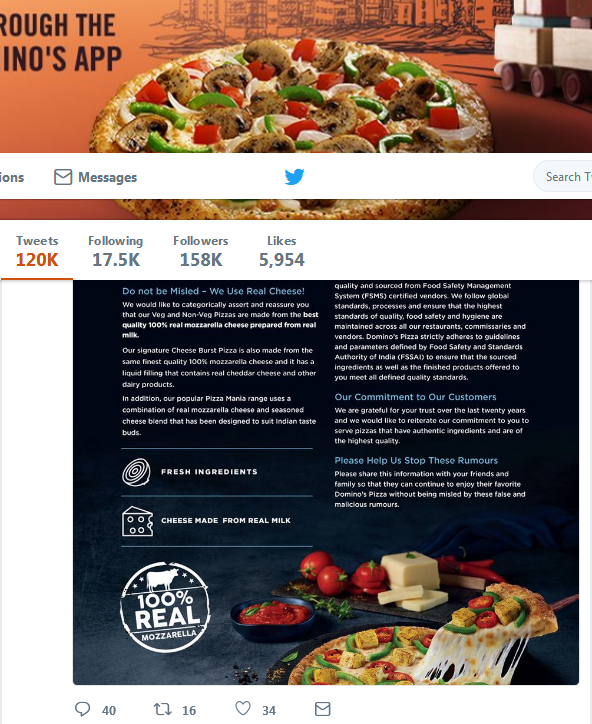 “Domino’s Pizza uses real cheese in its pizzas, don’t believe the false and misleading video,” Pota posted on Twitter even as his company released statements clarifying the video was fake across multiple media platforms.

Chief executives of most large companies, especially consumer facing brands, are now on high alert on social media platforms, personally keeping a vigilant watch on consumer feedback and being on guard against any damaging content at a time when examples of fake news and critical customer feedback are on the rise on social media platforms such as Twitter, WhatsApp, Instagram and Facebook.

“I try to take ownership of what people are saying about Starbucks India and attempt to fix issues immediately when things don’t go for consumers as expected,” said Sumitro Ghosh, chief executive at coffee retail chain Tata Starbucks India. “Pressure is on us to deliver.”

Whatever his work day looks like, Ghosh makes it a point to routinely check social media platforms like Twitter for feedback on Starbucks India, despite the company having a dedicated team tracking social media. More of an active reviewer than someone who tweets regularly, he said social media “can’t be ignored any longer”.

While categories such as foods get maximum share of noise on social media since consumers engage on a daily basis, the concern is across all consumer-facing brands.

Retail major Future Group CEO Kishore Biyani said he uses Twitter regularly “to get real-time in formation from customers and stakeholders”. “We have teams tracking it, but if there’s a grievance, I also alert the teams concerned at once,” he told ET.

Social commentator Harish Bijoor said the new paradigm is “consumer to CEO”. “If earlier a CEO stepped out into the market to see what customers were saying about his brand, now to a large extent he has to step into Twitter or Facebook. There are no filters,” he said.

“KFC’s consumers are largely millennials who spend more time on social media than any other medium. We use a deep listening tool to track all social media conversations,” Menon said. “However, I personally get involved with the team which helps me understand the pulse of my consumers, their choices and sentiments.”

Industrial house Mahindra Group chairman Anand Mahindra, who has 6.7 million followers on Twitter, famously apologised personally on Twitter when an employee of group company Tech Mahindra was allegedly ill-treated and sacked by a human resources representative of the company. “I want to add my personal apology… we’ll ensure this does not happen in future,” Mahindra had tweeted.

Tech Mahindra managing director CP Gurnani, too, had tweeted his ‘regret’ on the way official and employee discussion was done.

Others such as Mondelez directly engage with consumers. “Our consumer conversations team reports directly to the managing director’s office,” a Mondelez India spokesperson said.

“This ensures that the organisation is kept abreast of any critical consumer feedback across channels and that every single request, query or post is responded to.”

Foods companies are, particularly, at the receiving end of fake news spreading on social media networks.

ITC Foods has filed more than two FIRs against circulation of videos on social media, which claimed presence of plastic in its Aashirvaad atta brand earlier this year, besides releasing television commercials to dispel the rumours.

On June 1, PepsiCo India sued multiple American technology platforms claiming Rs 2.1 crore in damages for permitting the circulation of ‘defamatory and disparaging’ content against its Kurkure brand. This is as per a report in the Economic Times on the 1st of August.

PepsiCo in its suit claimed that videos/posts on social media made false claims that the snack contained inflammable plastic and was unsafe for human consumption.

On Friday, July 20, Twitter user Nikhil Jois received a mail from Twitter notifying that his account information is being submitted to the court for legal process because of his tweet from June 2015 : “Also… did you try burning Kurkure? It has pla” from his handle @nikhiljoisr.

“My tweet didn’t even say plastic, it just says ‘pla’. Many of us joke about kurkure and plastic. To me it looks like a frivolous attempt at bringing up something the from the past.” Jois is currently not seeking any legal help in this matter.