CCI Fines Google Because of Its Dominant Position In The Use of Android OS; Will This Slow Down Its Growth? 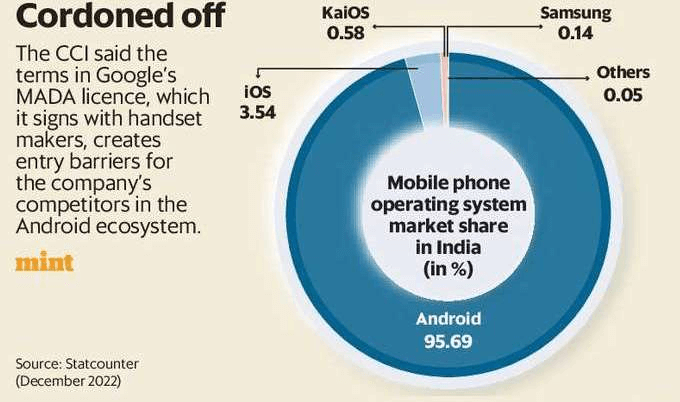 What did the CCI order on Android say?

The CCI accused Google of abusing its dominant position in the market, and fined it ₹1337.76 crore. It said that terms in Google’s Mobile Application Distribution Agreement (MADA) licence, which it signs with phonemakers, creates “significant entry barriers” for rivals in the Android ecosystem. “The agreement assures that the most prominent search entry points like search app, widget and chrome browser are pre-installed on Android devices,” the CCI said. It asked Google to decouple the pre-installation of its own apps with this licence and asked it to allow third-party app stores on Play Store.

What has Google said in defence?

Google‘s submission says that complying with the CCI will require the company to modify licence agreements and alter existing arrangements with over 1,100 device manufacturers and thousands of app developers, said a Reuters report. The company claimed that the order could stall the growth of Android in India. The operating system accounts for over 95% of India’s smartphone market, according to data from Ireland-based traffic analysis website StatCounter. It claimed that the CCI’s order asks for “far-reaching” changes that no other jurisdiction has asked for in similar cases against Google.

Has the MADA licence helped Android?

Yes. MADA does impose curbs on device makers, but it also helps bring consistency across the Android ecosystem, which has many stakeholders like developers and handset makers. It also allows deep integration of apps to Google’s services, like Google Pay, Maps etc. and this is what allows Google to deliver key security updates through the Play Store.

MADA comes with a certification that Google provides for the use of Google Mobile Services (GMS). With GMS certification, handset makers can ensure that apps can take advantage of deeply integ-rated Google services, like the Play Store and Maps, machine learning models and high-accuracy location tracking. But in order to gain GMS certification, device makers must ensure that third-party app stores aren’t installed, unless whitelisted by Google, nor can they allow the uninstallation of Google’s own apps.

Are there examples of MADA-free devices?

Yes. China’s Huawei still sells phones running on Android with its own app stores and alternatives to Google’s services. Another is Amazon’s Fire devices, which run on the open-source version of Android but without GMS services. Neither has been able to make a mark with these devices though, since services like Google Maps etc. are nearly ubiquitous with phones nowadays. Samsung, which has the MADA licence, has tied up with Indus App Bazaar in India to create its own whitelisted app store.