Amazon has written to Ajay Tyagi, chairman of market regulator Securities and Exchange Board of India (Sebi) and Manmohan Juneja, director general of Corporate Affairs, Ministry of Corporate Affairs, to withdraw any permission and consents granted to Future Retail Limited (FRL) related to the $3.4-billion merger deal between Future Group and Reliance. The letter has also been sent to other top officials at stock exchanges such as BSE Limited and the National Stock Exchange of India Limited (NSE). This is as per a report by CNBC-TV-18 & Business Standard.

Amazon has requested Sebi, Ministry of Corporate Affairs and other such organisations to take note of the Order on Vacation Application and the Order on Ad-Interim Relief read with Partial Award on Jurisdiction as passed by the Arbitral Tribunal, and accordingly withdraw any permissions and consents granted to FRL.

It has requested Sebi to compel FRL to comply with the dispositive directions contained in the Order on Vacation Application and the Order on Ad-Interim Relief read with the Partial Award on Jurisdiction which uphold, reaffirm and continue the Emergency Award (EA). This has to be done by inter alia withdrawing the notices for conveying the meeting of shareholders and creditors of FRL, and intimating such shareholders and creditors of the cancellation of such meetings.

“The continuation of the notices creates a false market in FRL securities and misleads the stakeholders,” said the letter dated October 30, 2021,

The letter alleged that, regrettably, FRL and its promoters have been able to induce many regulators to give permissions to FRL in relation to the composite scheme of arrangement between, inter alia, FRL and other entities of the Mukesh Dhirubhai Ambani Group. It alleged this is done on the basis of various misrepresentations made by FRL, and its promoters as to the nature, scope and extent of the EA Award and the prohibition contained therein.

“It is relevant to note that the illegal characterization and classification of the EA Award and the injunction granted against FRL have been repeatedly found to be bad in law by the Hon’ble Supreme Court of India, the Hon’ble Delhi High Court and the Arbitral Tribunal,” said the letter. “This is evident from the orders dated 06 August 2021 passed by the Hon’ble Supreme Court, order dated 18 March 2021 passed by the Hon’ble Delhi High Court, and now by the Arbitral Tribunal in Order on Vacation Application and the Order on Ad-Interim Relief read with Partial Award on Jurisdiction.”

The case centres on Amazon challenging FRL’s merger with RRL (Reliance Retail), alleging that the transaction breached an agreement with the American e-commerce firm. Amazon had cited its non-compete agreement with the Biyani-led chain. The deal specified any disputes would be arbitrated under the Singapore International Arbitration Centre (SIAC) rules.

Last year after selling his retail assets to Reliance, Future Group founder Kishore Biyani had said he had no option but to exit the business in the face of mounting debt and revenue losses, triggered by the pandemic and lockdown. Biyani said the company lost Rs 7,000 crore in revenue in the first three-four months of the pandemic phase.

Last year, the matter was arbitrated at SIAC, in which Amazon got a favourable ruling in October. FRL’s representative had told the arbitration panel in Singapore that if the deal with RRL fails, then the company would go into liquidation. The closure of the company would lead to over 29,000 job losses. 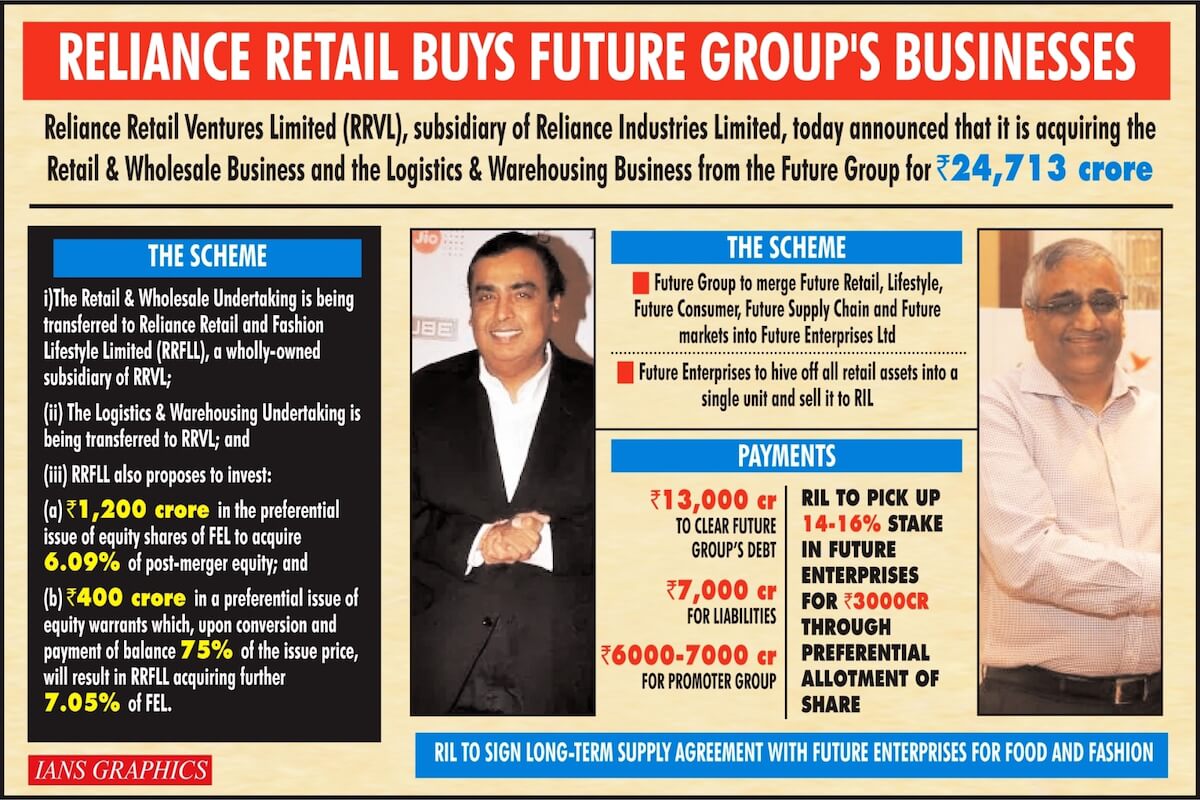 In August this year, the Supreme Court had ruled in favour of Amazon, holding the Singapore Emergency Arbitrator award against Future -Reliance deal enforceable in India. In September this year, in a major relief to Future Group, the Supreme Court stayed proceedings before Delhi HC, ordered no coercive action. The Court also directed the NCLT, CCI, and SEBI not to pass any final order in relation to the dispute for four weeks.

“With the orders from EA and tribunal of SIAC and refusal of the High Court refusing to grant interim relief to FRL, the onus is on independent directors to guide the board to act in accordance with the law,” said K Narasimhan, senior advocate, Chennai High Court.

In August 2019, Amazon had acquired a 49 per cent stake in Future Coupons, the promoter entity of Future Retail, for about Rs 1,500 crore.

However, in a letter dated November 7, 2021, the independent directors of Future Retail Ltd have complained to the Competition Commission of India (CCI) saying that Amazon has violated the foreign direct investment (FDI) norms when it picked up 49 per cent stake in the company’s promoter entity, Future Coupons Pvt Ltd and applied for CCI’s approval by concealing facts.

Asking the CCI to revoke the approval granted to Amazon to buy stake in Future Coupons, the independent directors said the CCI should act to stop Amazon from perpetuating “its evil non-desirable designs” against the Indian company.

In a statement to the stock exchanges, the independent directors of FRL said the Board of FRL consisting of majority of independent directors were not aware that strategic rights over FRL were being acquired by Amazon. The FCPL shareholding agreement (SHA) between the promoters and the board has not approved the FCPL SHA. Further, the FRL SHA has not been incorporated in the articles of association of FRL, the directors said.

Ravindra Dhariwal, Independent Director of Future Retail, said the biggest concern is to save the company and ensure that the small shareholders do not lose value.

Future Retail has asked the country’s top court to stall a Singapore arbitration panel’s decision to freeze a $3.4 billion asset sale after e-commerce giant Amazon had sought to block the deal.

Amazon has argued that its own deal with one of Future Group’s businesses contained clauses prohibiting the Indian entity from selling retail assets to anyone on a “restricted persons” list that included Reliance.